Understanding the Religion of Global Warming

My question is, how did so many in this generation get duped into becoming so religious? And how come these people have the gall to call it undisputed science? It strikes me funny in the same way when I listen to the laughable “creationist scientists” (the folks who believe the “earth is 6000 years old and we have proof”).

Just like the Church banned heretics in the dark ages, so too would the greens like to shut down dissenting voices. The mentality boils down to: “There is no debate – there is only consensus. Think otherwise, and you are going to hell.” The environmentalists just have changed who is who.

There is ample proof that this movement, just like any other religion, is primarily a tool for controlling people. If carbon dioxide is the big worry, there is a safe, inexpensive alternative – nuclear power. But these people are against the most rational answer to their supposed problem. Until their religion gets behind nuclear power, nothing good will come of their prayers.

Not many people deny the greenhouse effect exists or that the earth hasn’t warmed up over the past 100 years – that is science. What no one in the religious global warming community can answer is how much of that warming is due of mankind, how much is from the sun, how much is from cow farts. There is not a single model that can explain or forecast this phenomenon. When they figure that out, perhaps they will have something real to say on the topic. Until then, “100% consensus” type rhetoric/lies is meaningless and only serves the political elites who seek to command and control through fear.

The answer to my above question is:

Earth worship is perhaps the only place remaining for the old left to hide their agenda of command and control. And that is the funny thing about the old left – Marx recognized religion as the opiate of the masses. Communism kicked out the Church and put the State in its place. If global warming is the best God the old left can come up with now, I’m feeling pretty good about things.

The lesson of the 20th century is that free markets, private property, and individual rights is better than anything the left can serve, 100% of the time, on every last patch of earth, even where the ice is melting. 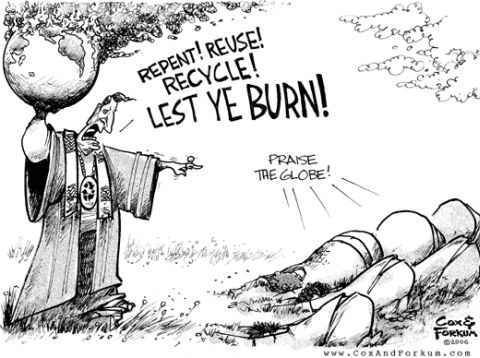